“We are pleased to have Hallinan lead our parade this year and we are grateful to his service to our country and his role in honoring our veterans who have passed,” said Sullivan.

Mr. Hallinan served as Superintendent, Arlington National Cemetery from October 2010 to July 2013.  He was detailed from the Department of Veterans Affairs to the Department of the Army as Acting Superintendent from June 10, 2010 to October 10, 2010.  Prior to his assignment at Arlington, Mr. Hallinan had served as the Director of the Office of Field Programs, National Cemetery Administration, Department of Veterans Affairs, since Oct. 20, 2008.  As Director, Mr. Hallinan was responsible for the development and implementation of National Cemetery policy, procedures, and centralized guidance related to national cemetery operations, with a 2010 total budget of $550 million.  He had oversight responsibilities for five Memorial Service Network offices, 131 national cemeteries, entailing 3.1 million gravesites and 19,000 acres. He also had responsibility for the Memorial Programs Service, the NCA National Training Center, the NCA Human Resource Center, the NCA National Cemetery Scheduling Office, the First Notice of Death office and the National Safety Program.  Prior to this assignment, he had served as associate director of the Office of Field Programs since June 15, 2003.

Mr. Hallinan was selected to be the director of Calverton National Cemetery in August 1994.  During his tenure, Mr. Hallinan and his employees were presented with the “VA Secretary’s Award” by Secretary Anthony Principi for their dedicated efforts on behalf of Veterans’ families whose loved ones were victims of the terrorist attacks in New York on Sept. 11, 2001.  Mr. Hallinan was presented the “1995 Leadership VA Award” by the VA Deputy Secretary Hershel Gober on Aug. 17, 1995 and on Sept. 26, 1996, and under Mr. Hallinan’s leadership, Calverton National Cemetery won the prestigious “Robert W. Carey Quality Award,” VA’s highest quality management award.  He and the staff he lead received three VA Scissor Awards for cutting red tape and improving services on behalf of the Nation’s Veterans and their families. He was a finalist in the FY13 Presidential Rank Awards and in 2015, received a Department of the Army Decoration for Exceptional Civilian Service from the Secretary of the Army, the Silver Helmet Civil Servant of the Year Award from American Veterans (AMVETS), and the Commander-in-Chief Gold Medal of Merit Award from the Veterans of Foreign Wars (VFW).

Before joining the Department of Veterans Affairs, Mr. Hallinan served as an infantry squad leader with the U.S. Marine Corps. His military service gives him more than 40 years of federal service. Mr. Hallinan is a Vietnam Era Veteran and a life member of the Disabled American Veterans (DAV). 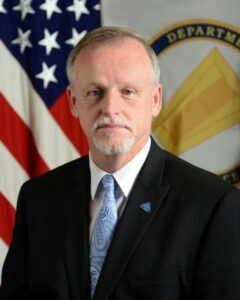